Feeling a bit like this after all that winter comfort food ???
Beasty is launching the Loose those love handles challenge ready for the summer
Whose up for it ???

It may well be Easter Bank Holiday Monday but instead of lounging around smoking in bed , drawing amusing faces on my arse and eating pickled onions like certain lazy bloggers from canada.
Beasty has had a productive day of Gyming , spring cleaning and gardening.
It is now freezing cold and raining so I am reclining in front of a roaring Wood burner (You can imagine me nekkid on a bearskin if you wish) eating curry. 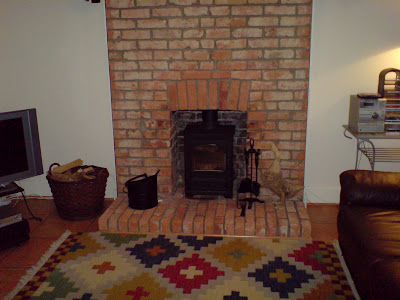 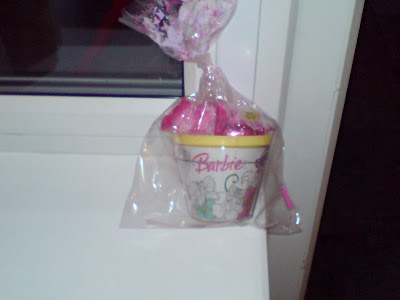 The Beast dropped in for a cuppa at the house of some friends that will remain nameless. On entering the kitchen and cheerily demanding a cup of steaming succour (and be quick about it) , was met with a 'bit of an atmosphere' . It soon became apparent the lady of the house had found a hidden packet of biscuits at the back of a cupboard . A flagrant and sneaky flouting of the matriarchal house rules of healthy eating.
I gathered she who must be obeyed would be hiding the offending comestibles , and doling them out as and when they were war anted , and it was made abundantly clear that the packet would not be empty for a long , long time.The master of the house was hiding in his shed , gnashing his teeth in impotent biscuit free frustration.I enquired of the matriarch what the problem with having a packet of biscuits caused , she ejaculated vehemently 'He will eat them'.
Typical , puritan female logic , I thought , what harm the occasional miniscule biscuit , to salve the aching soul , surely that's the point of a biscuit.
The Beast , as we all know is a champion of libertarianism in all its forms was aghast at this authoritarian regime , launched into a spirited speech on freedom of the individual to choose his or her own dietary needs , managing to weave in the bill of rights , the proposed European constitution ,Martin Luther King and Gandhi . I wrapped the whole speech up with words of wisdom 'that life was too short to be denied biscuits ' and further that the biscuits' destiny to be eaten and enjoyed' was being denied and my crowning glory, that if you didn't give a person the responsibility to act sensibly , then they would never have the chance to prove themselves.
It was a magnificent speech , and the Lady of the house looking suitably cowed handed over the goodies.
I bore my spoils to the shed to free my fellow man from the yoke of biscuit denial.
I was expecting humbled praise, the chastened nibbling of a modest singular biscuit and a noble choice of an ongoing life of spiritual biscuit related responsibility.Thus engendering a new age in male female understanding and tolerance.
The gentleman crowed with delight , leapt on the packet , like Micheal Jackson would an occupied sleeping bag at a boy scout sleep over , and GREEDILY DEVOURED THE WHOLE FECKING PACKET.
The Beast beat a hasty retreat , to be confronted by the lady of the house , who ha rumped mightily and hissed icily
He ate the lot didn't he .
Followed by a lengthy diatribe best summed up as' typical feckless bloody men'.
The Beast scarpered pretty damn quick , mid harangue , feeling marriage guidance probably would not be a wise choice of career.
**as is the vogue these days The Beast would like to point out that the scenes above have been 'enhanced' for entertainment purposes
***Except Mr G eating THE WHOLE PACKET :-)
Posted by BEAST at 20:35 32 comments: 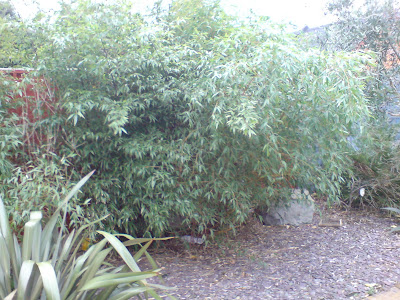 *
*
*
*
*
*
*
*
*
*
*
*
*
*
*
*
This is the view from the Beasts Kitchen window. I had to run out and take the pic when the rain stopped for 2 minutes, the light was terrible and my phone camera was fighting me all the way.
What we have is a mix of golden and black bamboo , hibiscus , an olive tree at top right , a couple of standing stones , I don't know what the thing is bottom left , and there is an acacia and a ginkgo you cant see lurking up round the standing stones , this is all bedded in a layer of slate chips.
Designed and installed by Mr C. Its lush , awash with different texture and movement.
What is really cool is I have my own standing stone 6 ft obelisk (which you cant see because of the greenery) and on the other side of the garden is the forest of railway sleepers , planted with more bamboo , the topiary dolphin , plus another olive and a large lump of pink granite (The Barbie Stone) . Ideal for picnics , nekkid full moon dancing or sacrificing virgins.
We have done that side before :-)
Posted by BEAST at 20:15 29 comments:

The Beast is all excited.
At the end of last year my bike was nicked from outside the gym. Despite being chained up against the glass wall of the customer service office , with 5 customer service reps sat on their lazy asses staring at my bike not 4 feet away , someone still managed to waltz up , cut both locks with bolt cutters and waltz off with it.
Well now I have a new bike.
Its fanny* magnet black , sleek and shiny , Mr C bought me new (Barbie)mud catchers , so I will not be be splattered. Now the weather has calmed down a bit I will be climbing into my cycle shorts(there is nothing like the feeling of chamois leather polishing ya crown jewels as you pedal) and peddling into work.
By the summer I shall have thighs like polished marble

The Gaskers being out doors types are already planning some pub related country cycle rides. I do hope they dress appropriately this time , dangling parts and bicycle chains don't mix in my book.


* That's a European front bottom type fanny not a US Arse type fanny
Posted by BEAST at 08:07 28 comments:

As you can imagine , The Beast is no stranger to bad wind.
But what a night. As Beast snuggled up under his Transformers Duvet , a howling maelstrom battered the Beast's Liar.
I awoke to 5 wheeley bins and someones fence in my front garden , and one of my double back gates has gone awol.

Wind being the theme of the day , Mrs Gaskers starts her cabbage soup diet this morning .As Mrs G sits directly behind , poor Beasty will be basking in the warm gusts tinged with a delicate hint of bowel.Formidable as the ghastly french would have it.

I cant post pictures to blogger at present so you will just have to taken as read the hilarious pictures I had lined up for this post
Posted by BEAST at 08:09 30 comments:

It has been said before , The Beast is going to the dogs.
As previously posted I was not having a good day yesterday , and then suddenly found myself sole carer for two dogs . Alfie and Lloyd. So I planned my evening around dealing with my canine chums , who are always a bit uptight when away from there daddy. We had our dinner , and then set out for an evenings walking , down to the beach , frollicked in the sand then wandered back home again. Which we all enjoyed and the dogs were magnificently behaved.
Alfie is always good , but Lloyd is a bit of a gangster. If anyone is going to take a leak on the floor or curl out a crafty dump in one of your trainers its Lloyd....... and you know he did it on purpose , just to make a point.
After a pleasant evening we retired to bed , Lloyd curled up in his little nest on the chair , and Alfie on his bed on the floor.Some time during the night Alfie sneaked up and snuggled up on my bed , and probably due to the two hour walk fell into a deep in continent sleep. I awoke at 5am lying in a big old wet patch. Duvet , sheets , mattress all warm wet and steaming.
This is the second time Alfie has done this to me ......and its a brand new mattress.
As if this wasn't bad enough , the thing that will have the Beast biting lumps out of the dinning room table will be Mr C's reaction.......
I can picture it now
***accusatory look***
followed by an Exclamation of ' Its funny how he only ever does it to you !'
Yeah Hilarious.....
So funny I almost WET MYSELF
but then again I didnt need to.
Posted by BEAST at 12:11 33 comments: