WHATEVER HAPPENED TO BABY SCARLET .....THE AWEFUL TRUTH

To make some sense of this terrible tale , we have to start at the very begining and delve into the psych of a damaged woman .
Born Scarlet Blue Vantitty to a migrant farming family in Darkest Devon .The beautiful young Miss Scarlet soon showed her star quality , tap dancing , singing and juggling cowpats at Devon County fairs.

After  a short few years of fame her star began to fade when television was finally introduced to Devon in 2010 .
A star struck Miss Scarlet then embarked an an increasingly desperate quest for  celebrity and adoration in the far flung reaches of Dorset .
Her crtically acclaimed ventriloquist act failed to bring in the punters and was soon forced to close

Following this disapiontment Scarlet tried a  comedy double act with Canadian Exotic Dancer Miss MJ. Called Tits n Teeth . All went well for a while, but  after 6 months of an English diet  Miss MJ's flatulence and a carlessly discarded cigarette caused  an incident on Weston Supermare Pier and the show was closed on Health and Saftey grounds (oh and the minor fact that the  Pier and Theatre burnt down) 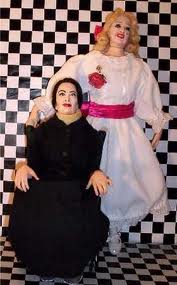 Altho this last ditch attempt at stardom had failed , and Miss Scarlet vowed never to speak to the ghastly Mavis again , she had found a place(The Fabulous Cafe C) where she would  be given a warm welcome and treated as a star.
Miss Scarlet was always personally greeted by proprietor Mr C and whisked with great ceremony to the VIP area , where she would be plied with Champagne and Cocktails  .
It was in the early hours of such an evening that Miss Scarlets tale begins

﻿Following these terrible events . Miss Scarlet was banned for life from Cafe C by an enraged Mr C . His cherished Golden Pussy smashed to a million pieces and  not to mention that his long suffering kitchen bitch was mullered and horror of horrors he may have to do the washing up himself.
The heavy burden of guilt and over consumption of hobnobbs finally took its toll as a frankly deranged Miss Scarlet , wheeled a fading Beast to Lyme Regis beach and our final sorry scene plays itself out

Beast sensing the end was near , finally, sensationally spilled the beans on the true events of that disastorous evening .
On the fateful night Miss Scarlet had imbibed a little too freely from the magic shot bottle that Mr C was brandishing with his usual abandon .Eventually as dawn broke Beast was ordered to stop malingering at his sink and drive a 'tired and emotional' Miss Scarlet to her sumptuos manor house (obviouslyCow pat juggling can be VERY profitable....who knew!).
Miss Scarlet in her addled state thought it highly amusing to kidnap one of Mr C's golden pussies and imperiously insisted Beasty complied .
On arrival at Vantitty Manor it was Mr BEASTY that was driving......it was Mr BEASTY that dropped and shattered the Golden Pussy and it was Mr BEASTY that sustained a rather pathetic sprained wrist by tripping over one of Miss Scarlets Gnome collection and landing in an ungainly heap in front of the car.
It was at this point a dazed Miss Scarlet came round and rationalised her ridiculous fantasy from the remnants of her drink addled memory , super glued a concussed Beast to a wheelchair and so doomed herself to a downward spiral of  festering guilt , thwarted ambition , Dandelion and burdock abuse and brings us finally to this sorry spectacle on the beach.
following these fateful revalations a shocked Miss Scarlet reels back , bosom heaving and eyes spinning as the final horror of the years wasted on misplaced guilt and social death , and collapses sobbing to the sand .
Beast croaks a final 'Think well of me Miss Scarlet and make sure the love mitten goes to a good home' and quietly slips away .
*****
epilogue.
As  a babbling Miss Scarlet is gently led away by the attendant from the Infomaniac Home for the Permanently Bewildered for  years of painful tap dance  and mime therapy,  No one notices a supposedly expired  Beast leap up from the sand and sprint for the number 57 bus departing for Bridport and all points west .
Two weeks later as the whole sordid story hits the press (The Dorset Echo) a furious Mr C is seen combing the local towns for signs of the duplicitious Beast , carrying a box containing 5,476 bits of shattered golden pussy and a large tube of super glue. He has vowed to hunt Beast down and make him stick every damn piece of the beloved feline into its correct and propper place.
As the sun set over Swanage sewerage  works ,  Mr C raises his head and howls at the rising moon .
****