There has been much discussion as to how people are reacting to these lockdowns and the often odd affects manifesting themselves.

I had been booked in for a MRI scan to see how Brian the brain thingy  is getting along . The main Dorset County Hospital being besieged by COVID patience, the procedure was moved to a private hospital called The Winterbourne

I turned up with plenty of time and then had to go through the torturous admittance procedures . You were so far away from the reception desk and having to wear a mask , receptionist balling at you WHAT IS YOUR NAME

Got all ready on the moving bed thing , neck brace , head immobiliser visor and earphones and the 2  nurses and doctor peeping over a barrier in the corner .

Just as the doctor shouted in we go! the thing started  to feed you head first into the scanner .

I HAD THE BIGGEST FUCKING PANIC ATTACK .

never had one before in my life , had loads of scans before during the Brian episode nothing.

Jump up ,  ripped off all the gear and legged it into the car park . Finally bought down by the two nurses before I made it to the road(Excellent rugby tackle I have to say) with them both shouting RELAX .... BREATHE... YOUR SAFE NOW  .

Some of the poor nervous devils traipsing across the car park to reception for their appointments must of thought I was an escapee from the birthing pool..I wonder how many thought fuck this and legged it.

Both myself and the two nurses ended up  in a heap in the corner of the car park and just laughing and laughing.

I am going to have to book another one and they have suggested I consider sedation next time round . The nurse explained they had been having a large increase in people reacting in exactly the same way , albeit most of them don't make it into the car park. The doctor thought it was a psych reaction to the loss of control of ones life during lock down.

They also suggested a bought a friend to perhaps hold my hand during the scan . 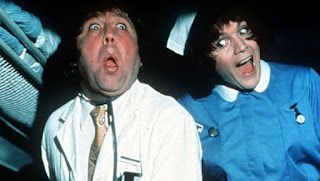 Oh my God!!! I too have had to make a hospital visit - now dreading if I have to have an MRI scan - hopefully not!
Also hope that your brian is fine :-)
Sx

I need a brian scan from the shock of two new posts in a row.

Oh, Christ! That first post wasn't a one-off, then?

Um, I mean: Oh, dear. Poor Beast. I hope Brian's not making himself too at home?


P.S. Just what the hells is going on? First 'Petra reappeared for the Garden Photos Event, then you (and your Brian) pop up, and I've just noticed that Tim has posted something, too!

Oh no, Beast! You poor thing. I am no stranger to unexpected panic attacks in the presence of doctory-hospitally things, but you put me to shame. I just go into crying hysterics or faint like a doofus. You straight booked ass like a boss! Definitely go for the sedation next time, just a couple of valium should do ya. And do keep posting on your blog too! THATS AN ORDER!!!!!

You'll scream like a girly when given the vaccination too, I suppose. How horridly disconcerting.