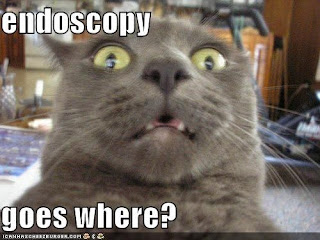 It all started with high blood pressure (spectacularly high) and my left eye going a bit blurry .
Doctors for blood pressure. Doctor asked innocently are you going back to work after this appointment . I said Oh Yes . Doctor said ...actually no , you must take this letter to accident and emergency . kept in for observation over night (Except I left at 10 pm pleading the case that the old boy in the bed opposite continually ripping his PJ's off and dancing about buck nekkid was not doing my blood pressure any good) . I had to promise to be back at 7 am for a barrage of inconclusive tests and eventual blood pressure meds ....... so far so good .

Went for an eye test as I thought my prescription had obviously changed only to be sent straight to the eye hospital as I was steadily losing all the peripheral sight in the left eye. - tests inconclusive

Tests came back  , had protein in my urine so sent to Urology consultant. Now on the whole all the consultants ,  nurses and doctors at Dorset County and Southampton general have been wonderful , friendly and efficient people . Urology in their entirety that I have had the misfortune to meet have been vile . Pa Beasty is of the opinion that anyone who spends their professional life peering up deseases dangling bits is bound to be crabby. The first consultant was blantantly in a foul mood when I went in . She barked at me SIT .
I said I beg your pardon  . She then grumpily looked at my notes and test results and said . Blood in Urine? . I said Sorry ?  She then screwed up her face and did a big sigh and said once again for the hard of hearing and the infirm! have you, sweetheart, got blood dripping out of your dick!!!
I said (Rather forcefully) I BEG YOUR FUCKING PARDON ??? and glared at her.
The rest of the consultation was somewhat awkward and another barrage of scans were booked (All inconclusive.
Now this all wandered on for a year my eyesight was fading fast in my left eye and my blood pressure was marginally in control . Eventually a very funny consultant at the eye hospital suggested a brain scan as they couldn't find any other reason for the problems .
Brain scan done and heard nothing for two months which everybody agreed was good news , otherwise , popular opinion said , I would have been hoiked back in pretty sharply .
First appiontment after the scan was a follow up with urology.
The consultant was eastern European of some stripe and didn't speak very good English .
When I sat down , he looked at me and said what are you doing here , we don't need to see you anymore (and looked a bit confused)
I said , Oh why is that were all the tests ok .
He said , no its because you have something growing in your head , you had a scan yes???
I was gobsmacked , I said are you saying I have a brain tumour ???
He said , (Looking rather irritated) Well I don't know I am not an expert !
I was thinking WTF , WTFF.
I said , Is it likely to be aggressive .
He said , Well you would be dead by now if it was
and that concluded the appointment . I was horrified , so when I got out I phoned Pa Beasty .
He said , How did it go ??
I said not very well , I think he just told me I had a brain tumour .
He then shouted out A BRAIN TUMOUR ! I heard Ma Beasty squawk in the background , there was a scuffle and Ma Beasty snatched the Phone .
She said , whats going on , the silly old fool just said you have a BRAIN TUMOUR .
I told her what had happened . She then started shouting at Pa Beasty, Allan its a BRAIN TUMOUR . There then followed about 10 minutes of Ma and a Beasty shouting BRAIN TUMOUR at each other like the other one didn't understand what they were saying .
This was a theme of the next lot of conversations to be had .
Got hold of Mr C and James who were just boarding a flight to some far flung destination . same result . Everybody (but me ) shouting BRAIN TUMOUR at each other , god knows what they thought in the first class lounge .
Crashed the management meeting at work  as after seeing a consultant who could speak English and knew what he was talking about the next day had booked me in for an operation the next week to remove it (Had to dash to Southampton an hour away to have an emergency consultation with a gore besplattered surgeon who popped out of the operating theatre to see me) , I would need emergency time off .
Picture the scene . My fellow floor supervisors and our managers trying to stay awake during a routine meeting , suddenly the door crashes open , A hyped up Beast storms in , shouts I need time off next week as I have a Brain Tumour.....Collective gasp!.... then everyone starts shouting BRAIN TUMOUR again. I bet Joan Collins(mistress of the Dynasty dramatic pronouncement) doesn't have to put up with this shit!.
Upshot of all this excitement was . Mr C flying back as he wouldn't let me go for the opp on my own.
The night before the opp an endocrine consultant phoned my and told me the result of all the tests meant they didn't need to opperate as the type of tumour I had was treatable with tablets in the first instance(Very successfully) and I was very lucky ...if it works .
By this stage I didn't know what to think . Mr C was not amused as he had cut his holiday short and just landed after a 14 hour flight. Soz ! :-)

Now during all of this I did start getting blood in my urine , so had to toddle back to the doctors and an endoscopy was booked . Not the greatest of procedures , having a camera stuffed up your bits , but it was confirmed I had bladder cancer . I could have just sat down on the pavement outside the hospital and cried .
Two opps later and a cheeky in bladder shot of chemo everything was sorted .
Just had the first year tests for both the tumour and the bladder cancer .
Tumour has shrank massively . My eyesight has recovered (The tumour was squeezing the optic nerve) . The very jolly consultant kept poking me, giggling and saying , you look so muchto better . He did tell me that as the tumour was so massive (A real whopper he giggled and prodded me again) I will have to take the tablets for the rest of my life . Apparently whatever this gland secretes normally has a level of 40 somethings in the blood , apparently my level when they first saw me was 40,000 whatevers . Imagine that he said . I said I didn't need to imagine it I felt like shit (More giggling)
The level is now down to 17 . He was obviously very pleased by this . Beast was star patient for a second . Give Beast a balloon!
Bladder cancer all clear , no reoccurrence and the opp wound had healed so well they had trouble finding it .

So gentle reader all is currently well , I feel back to normal and nothing is imminently about drop off or explode .
Mr C is as irascible as ever!

Poor old Alfie and Lloydilicious have both passed on and I miss them greatly but Mr C now has the gorgeous Toby a beautiful Belgian shepeard  , Wolf dog cross . Very boisterous but a real cuddle monster  .
I will be catching up with you all in your comments sections shortly .
Toodle Pip

Good God! I haven't read the post yet... but I am stunned to see a brand new post here! Welcome back!
I am very pleased you are still alive.
Sxx

BRAIN TUMOUR!?! Poor Beast. Still, good news now, eh? Well, apart from the having to take tablets forever bit, but it seems like a small price to pay.
Do you know, the most shocking thing about all this is discovering that Mr C flies first class. I never would have guessed.

I am actually glad to see you back. Except that I'm going to have to mess around with my blog to get you out of The Days of Coven Past and back to the land of the living...

P.S. I'm sorry to hear about Alfie and Lloyd.

P.P.S. I've just realised that of course Mr C would fly first class - he must have no end of money after working you so hard!

Welcome back. You have my support and best wishes. I was very alarmed when I read about your illness. I wish I had known, if only so I could've at least wished you well and kept you in my thoughts and prayers. And I am so happy to hear that you are recovering well. Thank you for sharing with us. I am very glad to hear from you and that you have an excellent support system full of loving family and friends.

Welcome back and Good Health and Cheers to you!

Only you could make tumours and bladder cancer laugh-out-loud funny.

For fuck's sake, stay healthy. I don't want to add another one of you Bitches to my "In Memoriam" sideboard.

BRIAN TUMOUR ? Who is this damned BRIAN TUMOUR ?! Nice to learn that you are alive & repaired, despite the attacks of BRIAN TUMOUR ! Also it is a good thing that all these dangly bladder bits are finally stapled in place.

By "sideboard" I of course meant "sidebar."

A sideboard is a piece of dining room furniture with shelves and drawers and cupboards. And I understand "sideboard" means "sideburns" in the U.K.

Thanks to Mago, I'll have "dangly bladder bits" on my mind all day.

Oh good god! I started shouting "BRIAN TUMOR!" out-loud to myself as I read this. So pleased that things are now under control. Take care.

Thanks to The Very Mistress, my sidebar will forever more be known as the sideboard.

Until I change my mind, of course. Or forget.

Thank you everyone. Poor Brian is a shrunken shadow of his former self and should earn a place on Mistress MJ's sideboard

I love Brian. He looks so cute on my sideboard.
Sx

Whatever they are she lets them out to play on the shag pile every other Friday.
Sx

Its no surprise Miss MJ has shag pile , I bet its the sort of home you could relive the rise and fall of the Roman empire before tea

Guess what!!! The next storm to come our way is called Brian. We are going to have a Brian storm!!!! I kid you not!!!
Sx

A good thing I stay in touch with Scarlet or I'd have missed these 2 posts.(But I'll pop you in my reader, which , unlike sideboards, is automatic) and Robert will be your mother's brother.

Thank you Mr E. All is good this end I hope your good too 😀

SWEET MARY SUNSHINE, sugar! The Mistress is spot on compared to all that's been going on with YOU, I can not complain about this damn cold that seems to have possessed me! xoxox (glad y'all are back, sugar!)

So glad you've come through this Beast.
[Sends manly hug through ether.]